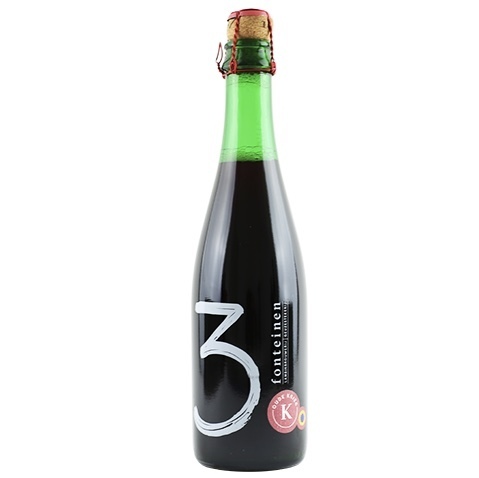 ABV 6.7% 375ML
Oude Kriek is the product of 3 Fonteinen lambic macerated for 5 months with hand picked cherries from Belgium. All but the stem are used, ensuring the oils from the kernel add to the complexity of the beer. Also worth noting is that, for the first time, this particular cuvee has been fermented and aged in barrel, rather than stainless steel, giving the beer a slightly more rounded palate. We get a heavy bakewell vibe, with distinct notes of almond wrapped up in the tart red fruit. An absolute joy.

Brouwerij 3 Fonteinen is a producer of lambic beer - a spontaneously fermented beer unique to the Zenne valley region of Belgium. Starting at the end of the 19th century as a lambic blender (i.e. buying lambic from other brewers, ageing and blending them) and later becoming a lambic brewery in 1998, they are now regarded as one of the best breweries in the world. Where once there were almost 300 lambic blenderies and breweries, there are now only a dozen producers left, of which 3 Fonteinen can be considered one of the most stubborn and traditional.

Producing lambic takes time and patience; it takes several years from the initial wort being brewed (the liquid product of the mashing process), to the bottle reaching sale. The unique flavour and acid profile are achieved from the combination of a particular blend of grains (40% wheat, 60% barley) and hops (aged, so as to keep the preservative function, but be less astringent), the long boiling time (4-5 hours) and the open and spontaneous fermentation. No yeasts or additives are added at any time and the beer is neither filtered nor pasteurised.